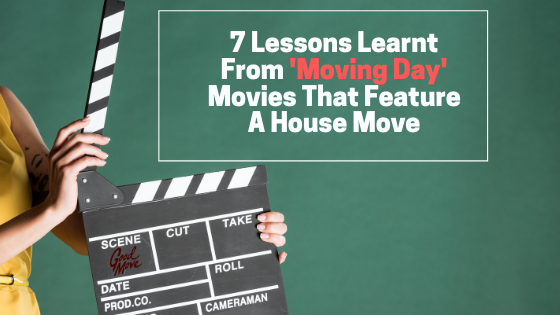 For many people moving house is a first-time experience fraught with anxieties around what to expect and how to plan for the big ‘moving day’.

Lots of films over the years have featured house moves as a way of showing not just what can go wrong but how moves can shape individuals and families as they adjust to a new life.

There are some great tips and advice to be learnt from these films on moving house.

Here’s some great movies to watch before you move or simply to get some ideas on what to watch out for and some of the common pitfalls.

Tim Allen and Tom Hanks star as the iconic duo, Buzz Lightyear and Woody, as they try to make their way back to their child owner, Andy, navigating a complex house move in the process.

Woody and buzz must team up to catch the removals truck containing all their toy friends and Andy who is gloomily sitting in the car in front having misplaced his favourite toys.

Moving lesson learnt: Create an inventory of all your household items to ensure nothing is left behind before the big day.

Remember also to label each box and its contents to ensure you know where everything else is, ready to unpack in your new home.

When Richard Pryor’s character tries to move his family to Idaho he employs the less-than-desirable services of the Hummingbird Moving Company.

As a result he encounters all sorts of issues come moving day, including having his entire kitchen and swimming pool taken out!

Moving lesson learnt: Never underestimate the value of moving with professionals. Check for accreditation and read reviews online to ensure the removals company is genuine.

It’s also worth double checking what insurance coverage the firm offers to ensure you are covered for any breakages or damages.

If you think moving house is hard try doing it with 12 kids in tow!

The 2003 remake of Cheaper by the dozen sees Steve Martin’s character Tom Baker attempt to juggle the demands of an ever-expanding family.

All manner of things start to go wrong but Steve Martin’s ‘dad’ character continuously seeks to reassure his family they would be ‘a stronger and happier family’ by moving.

If you’re moving with kids and need advice check out our post:

How To Successfully Move House With Children (Including Infographic)

Moving lesson learnt: Moving home is often a difficult experience for young children who have strong bonds to school and friends.

Keeping children occupied and involved is an important step for any family moving house.

This Disney and Pixar movie sees an elderly widower named Carl Fredricksen tie thousands of balloons to his house in an effort to ‘uproot’ and fulfil his late wife’s dream of seeing South America.

With a local boy in accidental towaway Carl’s ‘flying’ house encounters storms, wild dogs and all manner of different challenges.

Moving lesson learnt: Always use the right equipment when undertaking a house move of considerable size.

Think straps, harnesses and pully manoeuvres. Definitely not balloons! And remember if in doubt call the professionals in. It’s better to get hired help then risk an injury.

This Canadian comedy film follows the lives of four hapless men who work for a removals company in a down and out town in Nova Scotia.

Between them they manage to drop several items off staircases, break precious family heirlooms and generally just get the job wrong.

Moving lesson learnt: Choose your removals team carefully and make sure they are fully trained to carry out your house move.

Also remember to take good care of your movers – the offer of a glass of water or a cup of tea and a biscuit can go a long way!

If you ever thought your moving day experience was bad you need to watch this comedy film featuring interweaving stories of seven households caught up in a property chain on moving day.

In one memorable scene, a couple whose furniture has been stolen discuss their predicament with a removals man who “has been in the business for 37 years”.

“He rang to tell them to come and give him an estimate. They did, he said yes and that was it.

Moving lesson learnt: Choose your ‘removals tribe’ carefully and always get a quote in writing.

It’s also advisable to look for a removals company that offers an advance payment guarantee to ensure booking slots are honoured.

All removers that are registered with the British Association of Removers are signed up to such a scheme.

Another Disney film on the list and another great film built around the premise of moving house.

Similar to Cheaper by the dozen mentioned above this film explores themes of anxiety and unrest.

The plot sees the main character, an 11-year-old girl move from a small town in Minnesota to the bustling streets of San Francisco.

Her sadness increases in an early scene when her family enter their new house without any of their belongings. Shortly after they are informed their moving van has ended up in Texas and won’t arrive for weeks.

Moving lesson learnt:  Be prepared for mishaps as part of your house move and ensure you pack an essentials box of items to take with you on your first night.

Did you enjoy this list? Have we left any great ‘Moving Day’ films off you can think of. If so, please feel free to let us know your thoughts and feelings below.